Share a memory
Obituary & Services
Tribute Wall
Read more about the life story of Joy and share your memory.

Joy J. Bramson, age 101, of Moville, passed away on Saturday, January 07, 2023 at the Pioneer Valley Living & Rehabilitation of Sergeant Bluff.  A funeral service will be held on Wednesday, January 11, 2023 at 10:30 AM at the Trinity Lutheran Church of Moville with the Pastor David Halaas officiating.  Burial will be at the Kingsley Cemetery of Kingsley.

Joy J. Bramson, was born to eternal life and reunited with her husband on January 7, 2023.   A longtime resident of Pierson and Moville, Iowa, she was residing at the Pioneer Valley Living Center in Sergeant Bluff, Iowa, at the time of her passing.  Joy previously resided at the Lawton Senior Living Facility for several years.

Joy was born on July 31, 1921, in Sioux City, Iowa.  She was the daughter of Peter C. Rieckmann and Emma (Peterson) Rieckmann of Pierson, Iowa.  A long-time parishioner at Salem Lutheran Church in rural Correctionville, Iowa, she grew up on a farm three miles south of Kingsley, Iowa, and attended rural school, Rutland #3, for 8 years and later graduated from Pierson High School in 1939.

Joy received a certificate of graduation from the Sioux City Academy of Cosmetology, and a 2-year teachers’ certificate from WestMar College in LeMars, Iowa in 1945.   Upon graduation, she taught grade school in Swea City, Iowa, for several years.

Joy married Robert T. Bramson, on January 1, 1947, at Salem Lutheran Church.  They lived in Pierson where she assisted her husband in the publishing of the Pierson Progress newspaper and in the job printing business.  In the fall of 1957, they purchased The Moville Record and combined the two newspapers.  They moved to Moville at that time and continued to publish the Moville Record and The Pierson Progress until 1974.  Her husband, Robert, passed away on July 28, 1989.

She was preceded in death by her parents and husband, Robert. 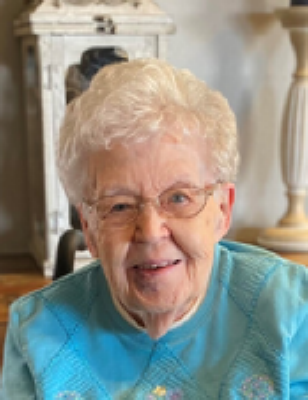